The title of the book is significant as kundalini yoga is about experiencing for yourself and tuning into the inner guru. This book is meant to be continually used over the years as the reader develops their own kundalini practice.

Yogi Bhajan is acknowledged in the introduction as the man who brought kundalini yoga to the west in the late 1960’s. There is a brief definition of yoga and kundalini as its essence.

In Part 1 the basics of yogic energetic physiology and numerology are introduced, the numerology based on the movement of the planets, relation of the sun to the earth and the effect it has on your life. It shows how to work out your numerology in relation to the ten bodies. so I found out that my Soul Number was 9; Karma Number 8; Gift Number 6; Destiny Number 7; and Path Number 6.

Then follows a detailed look at the ten bodies: the Soul Body, Negative Mind, Positive Mind, Neutral Mind, Physical Body, Arcline, Aura, Pranic Body, Subtle Body, Radiant Body and the Embodiment.
Three possible interpretations of the chakra system are offered: as a process of evolution; as a transformer of energy and as a system of esoteric instruction. The chakras are listed with their attributes and a chart for each, followed by a questionnaire to find out if all your chakras are balanced.

Part 2 discusses the best way to go about preparing for a kundalini class. It is emphasised that group practice is preferable. It suggests practicing a Kriya for 40 days to improve negative traits; 80 days to implant a new positive habit and 120 days to seal it in your psyche. It also talks of a Kriya that could be the key to your lifetime, and if you find that Kriya then to practice it for 1000 days for self-mastery.

Then it is offered that Yogi Bhajan’s suggested routine is followed to get ready for practice: cold shower, almond oil, white cotton, a sheepskin or rug and a pleasant environment. The ‘Amrit vela’ or ambrosial hour of dawn or dusk is recommended for practice as it intensifies the effect of the yoga, and we are more conscious of higher frequencies. It gives some warm up exercises and describes how a kundalini yoga class starts. Always the Adi mantra is recited at the start of the class “Ong Namo guru dev Namo” and the focus is taken inward to the third eye. Jalandhara bandh is held throughout and at the end of each exercise Mul bandh is applied. Between every exercise you relax with a straight spine to let the energy settle around the body and absorb the exercise.

Part 3 illustrates Sat Kriya, which Yogi Bhajan recommends for everyone every day. He calls it a full body workout, as it massages the inner organs, strengthens the sexual system and increases energy flow, releases energy stored at the navel centre and it uses the bij mantra of “Sat Nam” Truth is my identity.

Yogi Bhajan said the Kirtan Kriya meditation is the fastest working mantra as it cuts through any neuroses and is spoken, whispered then thought. yogi Bhajan says “we chant in three languages of consciousness, representing the three ages of the great cycle: the everyday human voice of the Base Metal Age we are living through; the whisper of lovers in the dark who remember the Silver Age of myth and legend; the silence of the Divine, the Golden Age that was and will be when All are One.”
For Kirtan Kriya meditation the thumb touches the Jupiter, Saturn, Sun and Mercury finger in turn as we chant Sa, Ta, Na, Ma. “Sa Ta Na Ma” is infinity, life, transformation and rebirth. The infinite cycle of life.

Finally in Part 3 there are meditations for each of the ten bodies. I found this particularly interesting to work through as the mudras and mantras are so satisfying. For example meditation for the Arc Line: in easy pose cup palms and hold them face up above the knees, then scoop arms as far back over the head as possible, like throwing water over you, saying Wahe guru, Wahe guru, Wahe guru, Wahe jio at the same time. Yogi Bhajan says this meditation clears karma stored in the Arc Line “the power of Infinity is not outside, it is inside. when ‘I’ and Infinity create impact, you’ll become totally Divine. otherwise there’s a duality that keeps you away from reality.”

Part 4 deals with components of kundalini such as pranayama, mantra, mudras, asanas with pointers for safe alignment.
Talking about breath, the authors say that if you change the way you breathe you change the person you are. Clavicular breathing sustained for too long could induce a panic attack and conscious control of the breath is an essential part of yogic practice. “Kundalini yoga employs a wide spectrum of breathing techniques to balance, energise, modify and heal.” Unless specified, breathing in Kundalini yoga is through the nose. Long deep breathing and rhythmic breathing are looked at. “If you slow the breath to eight breaths per minute you move into a meditative state; slow the rhythm to six breaths or less per minute and the pituitary gland is stimulated. if you slow down to four breaths per minute or less, the pineal gland activates the Crown Chakra.”

Breath of Fire and Alternate Nostril Breathing are also described.
In the Mantra section Yogi Bhajan is quoted: “Mantra is two words Man and Tra. Man means mind and Tra means the heat of life. Ray means Sun. So mantra is a powerful combination of words which, if recited, takes the vibratory effect of each of your molecules into the Infinity of the Cosmos.”

The mudras looked at are Buddhi; Buddha; Christ; Praying Mantis; Reverse Prayer; Shuni; Prayer pose; Gyan; Lotus; Surya; Venus Lock and Yoni Mudra.
The bandhs are also described in detail: Mul bandh; Uddiyana bandh; Jalandhara bandh and Maha bandh.
There is a useful glossary and some resources listed at the back.

I found it an inspiring and useful book;  it is one that I will often refer to over the years.

Pranayama is the expansion of life force. It can be through different breathing techniques, exercises and through sun gazing. Fruits and raw food carry prana and we can direct our intake by our choices.

In the Yoga Sutras Patanjali defines it as the slowing down of the force behind inhalation, exhalation and the expansion of prana. So “the external or outward flow, the internal or inward flow and the absence of both during the transition between them (retention)…are regulated by place, time, and number, with breath becoming slow and subtle.”

Patanjali also says that it is through pranayama that we achieve the capability for true concentration (Dharana) the next step.

Psychologically Pranayama can make us feel grounded and elevated, combined with mantra it can give us a strong sense of self, it can purify and restore the mind and open the heart. Through the practice pranayama can be directed anywhere around the body for restoration and strength. 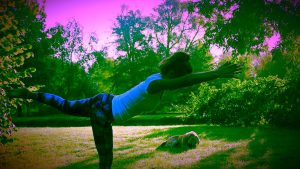 I practiced Nadi Sodhana, and equal ratios (square breath) for 30 minutes a day over a week. I felt balanced, my energy levels were more even, I had more of a neutral mind.  I was alert and able to experience more intense feelings without being thrown off course.

Pranayama is a powerful and beautiful technique. Gauge your own practice with awareness.